Side Hustles 2022: 93% of Working Americans Have a Side Hustle

A new survey reveals that 93% of working Americans also work a side gig to make extra cash - Insuranks.com

Table of contents
1. How Many Americans Work Side Hustles?   2. Business Insurance for Side Hustlers   3. Inflation and Side Hustles   3.1. Methodology 3.2. Fair Use

Homepage > Business Insurance  >  Side Hustles 2022: 93% of Working Americans Have a Side Hustle

2022 is shaping up to be an unpredictable year for Americans financially. With inflation putting extra pressure on our bank accounts, and an impending recession, you might be wondering what you can do to make some extra cash on the side.

There is no shortage in possible side hustles, and most only require an easy sign up through an app. Think Uber, Etsy, Amazon, DoorDash, Depop and other e-commerce ventures. You can sell candles, arts and crafts and baked goods - from home or through farmers markets, start a retail business, become a bartender or a DJ, dog walker or  pet sitter, provide online personal trainer classes and so much more! The list of possible side hustles is ever-growing, and there’s no shortage of opportunities for those who want to make a little extra money nowadays...

How Many Americans Work Side Hustles?

Gone are the days of working 9 to 5. A new survey of over 1,000 Americans finds a whopping 93% of Americans who are currently working part-time or full-time have a side hustle. Of those, 38% work one side job, 38% work two, and 20% work three or more.

When asked what type of side hustles they have, an overwhelming 95% say they do online surveys to earn extra bucks. 18% sell items on sites like eBay, Craigslist, and Facebook Marketplace. 13% do freelance work, and 9% sell their used clothes on sites like Depop.

When asked why Americans are working a side hustle, most (63%) say it’s for something to do and a bit of extra cash. 44% say they need to do it to make ends meet and cover their bills. 32% say they genuinely enjoy it.

Inflation is pushing the prices of necessities (and just about everything else) up, and 28% say this is the reason they’ve taken up a side gig. Additionally, 26% say they work the extra job to pay down debt faster.

Investing extra hours outside of work seems to be paying off. The average monthly income from a side hustle is $483 (or almost $6,000 a year). This differs between men and women, with men earning an average of $596 every month and women earning $378 every month.

Business Insurance for Side Hustlers 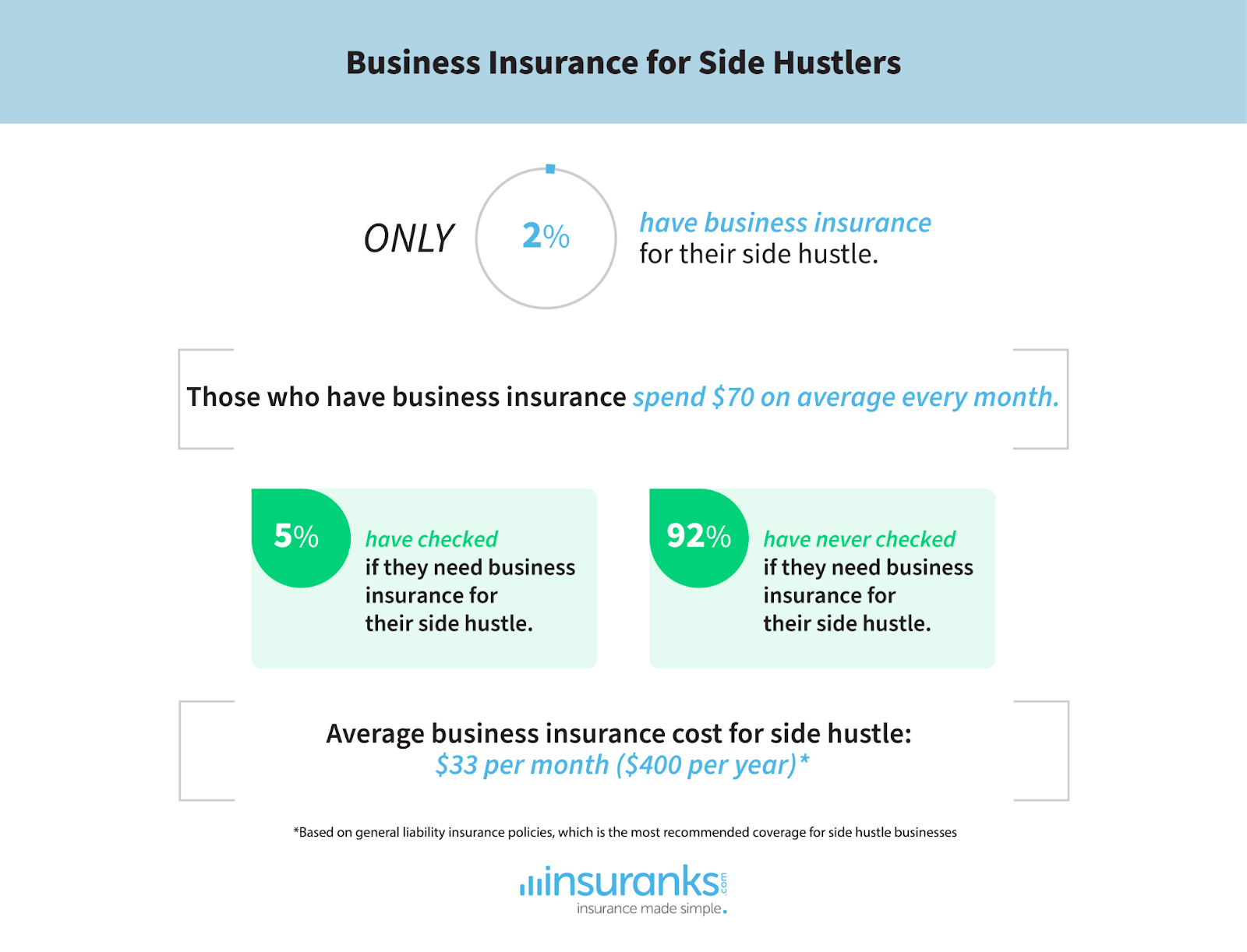 Some side hustles have small business insurance options. Even yoga teachers, pilates instructors, personal trainers and food delivery drivers can get business insurance to protect themselves and cover them in an emergency. Despite this, a high 92% of workers have never checked to see if they need insurance.

Small business insurance doesn't need to break the bank, and it’s worth checking to see if a simple general liability insurance policy (the most recommended for side gigs) would be beneficial. Based on our data, this costs on average around $33 per month (or about $400) per year.

Inflation and Side Hustles 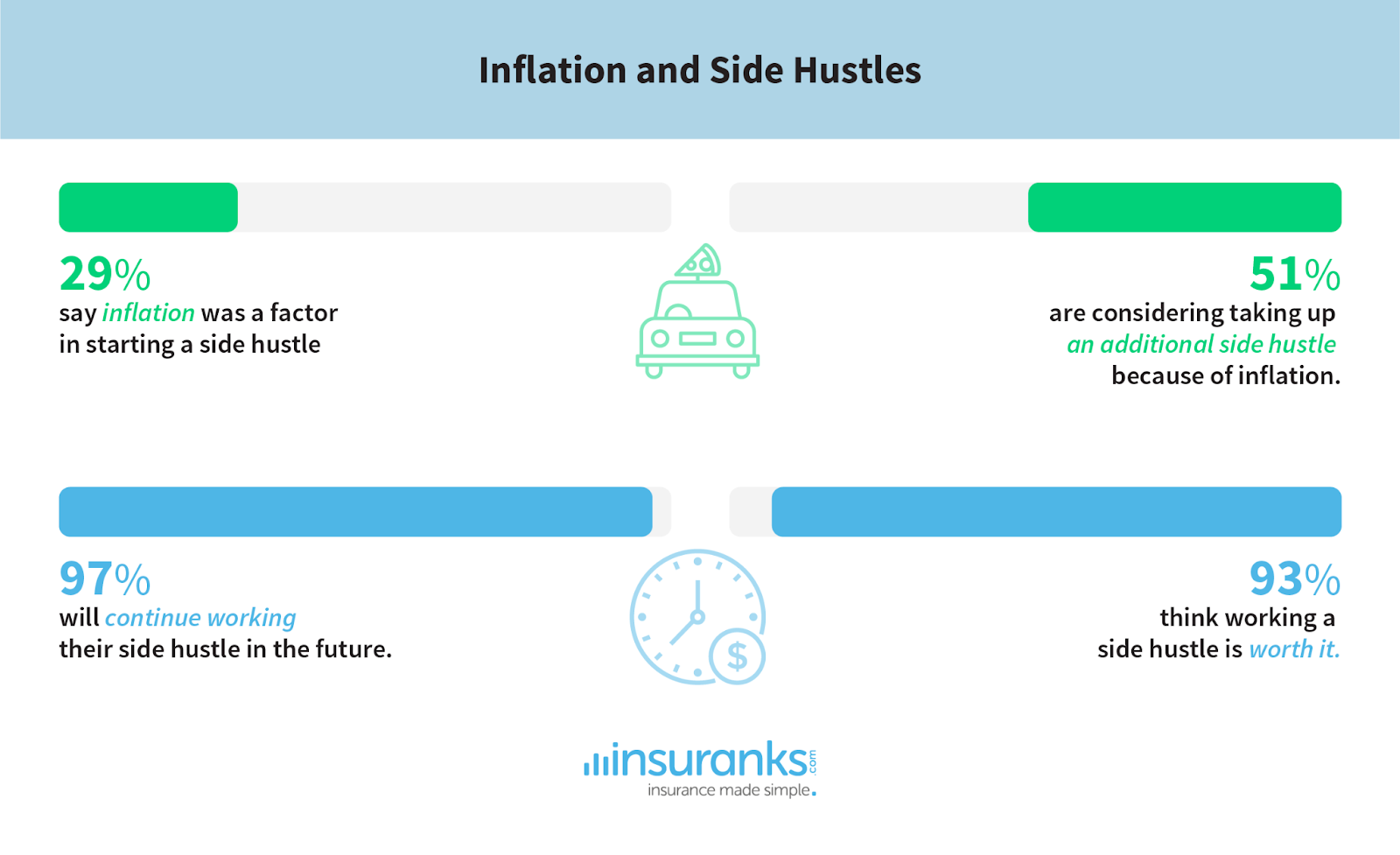 Many Americans are feeling the pressure of inflation, with 29% saying that inflation was a factor in signing up for an extra job. Around half (51%) of Americans also say they’re considering taking up an additional side hustle because of inflation.

Although it requires more hours and maybe some extra stress, 97% say they’ll continue working their side hustle in the future, and 93% say working a side hustle is worth it. It’s clear that Americans see the benefits of working an extra gig on top of their main job, and most really enjoy it.

When using this data and research, please attribute by linking to this study and citing https://www.insuranks.com/

This company does not care about the people they insure or the people that work for the company. They do stupid meets all day long about quality on calls while injured workers sit in pain waiting for answers but can never get to anyone to help them. This company hires uneducated people to run the company so that nothing important get done. I have heard so many stories about injury workers having bad service. They can’t never get their claims adjuster on the phone and the doctors that this company tells people to go to do not care about their patients causing their injuries to become worse. This company neglect on taking care of people’s injured employees have caused people to end up with disabilities for the rest of their life. if you get insurance under this company you will end up having to hire a lawyer to fight them in court. Do not get a policy with this company. Your employees will pay the price and so will the owners of the company. Honestly they need to get shut down. Avoid at all cost do not get this insurance and do not work for this company.

Terrible customer service. I got this insurance for my Amazon store when I ran one, took a break and cancelled all my subscriptions. I called these guys and they recommended sending an email. They never responded and have been charging me since then. Definitely going to dispute via the bank. Hate when businesses take advantage of other small businesses for their own gain.

I purchased a year long policy for my small business I paid for the year up front. First they sent me the incorrect paperwork and acted as if I had something to do with the mistake. About three weeks later I received a bill for the policy. I then sent countless email as the payment did clear my account. About a week later I'm told they have no record of my payment. Now I have to send any documents proving I said then. It went on for weeks. More requests of proof from this person then another. Every conversation had an under lying tone of me being dishonest. Finally I just gave up with them and filed a despite with my bank which took all of three days.. So now I'm continuing to receive emails that my policy is past due and will be cancelled. Funny, I was told I didn't have a policy because they couldn't locate it.

Purchased the General Liability policy I needed to fulfill a contract for my hiring party. Simply Business made it very easy to complete an application and review multiple quote options. Ended up purchasing a policy for 1/2 of what I originally was told by my agent.

I insured my small business with them from early 2016 to January 2022. I had a workman's compensation policy with them the entire time for my staff of approximately 10 people which fluctuated up and down minimally over the years. We ran a very safe operation and never had so much as one claim. I sold my business in early 2022 and cancelled my policy which triggered a final audit of $2871.00 which was owed back to me. Of course I dissolved my LLC immediately after selling the business and thus closed my bank checking account at the advise of my accountant. Though my name was on the business policy, Employers Preferred Insurance Company refused to issue a check to me directly as the policy holder due to...you guessed it, policy. Long story short, if you sell your business keep a small amount deposited in the checking account because it's almost a guarantee that companies such as Employers will use their policy to weasel their way out of money owed after the dissolution of a business. I should have known that I would be treated a just another number shortly after I signed with them as the sales agent just disappeared after I was set up for an online account to manage my policy. My next business venture will entail me working with an actual insurance agent who has an office in an actual brick and mortar building!


Disclosure: Insuranks.com is an independent educational comparison service and an advertising-supported publisher. Some of the companies/offers that appear on the website are from our partners which we may receive compensation from. This may influence which companies/offers we write about and where and how it appears on the site. However, this does not impact our assessments. We solely highlight companies, products, and offers that can help you make smarter insurance decisions.