1. Volkswagen Jetta Insurance Cost by Model Year2. Insuring Your Jetta: FAQ's2.1. Is a Volkswagen Jetta Expensive to Insure?2.2. Do Jettas Have a Lot of Problems?2.3. Why are Jettas so Cheap?2.4. What Insurance Group is a VW Jetta?3. What Are The Top Factors That Determine Car Insurance Rates?

One of the most iconic cars ever created was the Volkswagen Beetle. The little round cars became massively popular during the "hippie revolution" of the late-1960s and early-1970s as they were simple, durable, and incredibly fuel-efficient for their time. However, in 1985, the consumer market was demanding a slightly larger four-door sedan with a little more roominess and space. And thus, the Volkswagen Jetta was born.

Aside from the Beetle, the Jetta is the company's longest-running car model and has been a best-seller for over 35 years in a row. If you're thinking about purchasing a VW Jetta and you're curious about the average cost to insure your new Volkswagen, then you've come to the right place!

In today's article, we're going to discuss Volkswagen Jetta Car Insurance. We'll start by answering some of the most commonly asked questions regarding Jettas and insuring them. Then, we'll give you an itemized list of Volkswagen Jetta insurance rates that you can expect. Let's take a look at this modern classic. 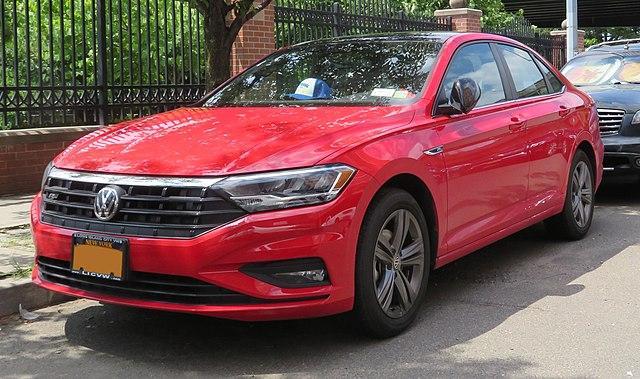 The Jetta is a vehicle that Volkswagen has not been afraid to modify and adapt to modern times. With each consecutive version, the automaker managed to manufacture the same degree of quality and reliability into the vehicle while making consistent efforts to modernize the vehicle to meet the latest safety standards, comfort requirements, and onboard technology.

So, the real question is- Does it all come at an expense once it's time to purchase insurance?

Is a Volkswagen Jetta Expensive to Insure?

The cost of your monthly premiums is likely going to be one of the deciding factors as to whether or not you end up purchasing any given vehicle. You might think that you could afford the monthly payment on a brand new Porsche until it comes time to pay $600 a month in insurance... The same goes for economy cars and sedans such as Jettas, Accords, Camrys, and others.

Thankfully, though, Volkswagen Jetta insurance rates are quite fair, especially given the quality that you receive. On average, a full coverage policy for a newer model Jetta costs right around $1,390 per year. If you opt for the cheaper basic liability package, then you'll pay even less at around $450 per year.

Do Jettas Have a Lot of Problems?

The latest Jetta models have received nothing short of stellar reviews from car insurance companies and auto reviews alike. The 2021 model (which is the 7th generation that started in 2019) received a 5-star overall rating from the National Highway Transport Safety Administration. The 6th generation model (which was produced from 2011-2018) also received stellar reviews and was a huge step up from the earlier models.

However, the 5th generation Volkswagen Jetta was the model that stemmed all of the rumors and horror stories about Jettas being expensive to maintain and purchase car insurance for. In 2006, Volkswagen released their latest upgrade to the car, removing many of the boxy edges and implementing a smooth, round styling.

Unfortunately, though, the 2006 model also came with a host of problems and received more recalls and complaints than any other vehicle the company had ever made. Although they tried to fix some of the problems in the subsequent years, the entire 5th generation ended up being problematic. That being said, as long as you purchase a Volkswagen Jetta made after 2011, then you shouldn't have to deal with too many problems out of the ordinary. Today’s Jettas are almost as reliable as Japanese competitors like the Nissan Sentra and the Toyota Corolla.

Why are Jettas so Cheap?

These days, a lot of people put value on brand names and expect to pay a lot for popular cars. Just look at the Honda Civic that used to be regarded as a super-cheap budget car. Today, it's one of the most expensive Japanese sedans on the market!

However, one of Volkswagen's core values has always been to make an affordable car that everybody could drive. The Jetta may be a good bit cheaper than its American and Japanese counterparts, but make no mistake- it's still built to the same standards of quality. In fact, most of the new Volkswagen Jettas use a similar powertrain to those contained in Audi's (of which Volkswagen is the parent company).

What Insurance Group is a VW Jetta?

The VW Jetta is officially classified as a sedan. Although they do have a "sport model" (The turbocharged GLI 2.0), even this model is categorized as a sedan. The only difference between standard Jetta trims and the GLI is that the GLI has tighter suspension, higher quality bucket-style seats, comes in brighter colors, and has a slightly larger turbocharged engine block.

Sedans are, by far, the cheapest group of vehicles to insure. The Jetta has a number of great safety features, plenty of room for your friends and family, and has received stellar crash test ratings.

What Are The Top Factors That Determine Car Insurance Rates?

A number of factors contribute to the average cost to insure a vehicle. The numbers listed above were taken by averaging data from 40-year-old drivers with a clean driving record across the United States. However, the price that you'll actually pay could be a lot different (more or less expensive), depending on where you live (your zip code) or your history and driving record.

Here are the top factors that determine insurance costs: